There are many ways to distinguish yourself or your firm in the minds of prospects and customers. Great service, helpful people, frequent contacts, adding value with newsletters and so on. But today I want to talk about the concept of surprise as a distinguishing feature of your brand.

What reminded me of this is a ballet performance I attended with my wife last week.  One of the works in the show, conceived and performed by BodyVox, an innovative and talented Portland, OR dance company, was a video of a pas de deux between a male dancer and a large backhoe set to the music of Saint-Saen’s The Swan. Hilarious, but what a really interesting concept.

Surprise is often used in auto insurance ads, maybe because auto insurance seems so mundane. Check out this Nationwide ad, where paint has spilled out of a fictitious paint company on to the street and some cars parked below. I think it’s actually problematic as to whether the accident involves automobile coverages or, more likely, the paint company’s premises liability coverage. In any case, it’s a surprising image and the bottom line after the the claims adjustment confusion has been resolved is that, after all, Nationwide has you covered. (Covered, get it?) 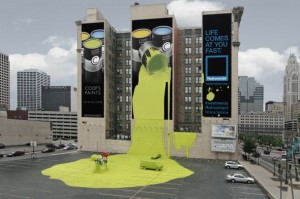 Surprise can enhance your personal branding, too. Have you ever heard of Scott Ginsberg, otherwise known as “The Nametag Guy”?  Scott’s all-consuming passion is wearing a nametag.  He always wears a nametag — always, no matter where, no matter when. To be sure his name tag is omnipresent, he wears one on every layer of clothing — and if he takes his shirt off, he’s got a nametag tattooed on his chest.  Scott Ginsburg has done as much for nametags as Popeye has for spinach. Even his website is a name tag: www.mynameisscott.com.  (Thanks to Matt Brown for mentioning Scott Ginsberg in his excellent book for insurance producers who want to know the secrets of insurance sales success, “The Insurance Xperience.” By the way, this is a great read if you’re ready to be surprised by insurance sales. Read Ryan Hanley’s review of the book here.”)

Is there something surprising about your personal life that you can carry into your business? Internet marketing speaker, consultant and blogger Ed Taylor has become so closely identified with his Santa Claus persona after playing that role for many years that he now bills himself as “Santa Ed Taylor.” Ho, ho, ho.

Surprise doesn’t have to be dramatically visual or aural. You can do what an agency in Florida, Patrons Insurance Agency, does and offer free homemade cookies on Fridays to anyone who stops by. I find that rather unexpected for an insurance operation, which I never associate with food of any kind

Here are some ideas I don’t recall seeing anyone use, but I offer them here for what they’re worth:  Instead of putting your agency name on golf balls, how about putting it on tennis racquets or bowling balls?   Instead of having a company capabilities brochure with the typical corporate graphics and photos of groups of people around the conference table, get a designer to create it for you as a comic book. Make everyone in the shop some kind of superhero. You could probably carry this theme into all parts of your communications, even your website and emails. I’m not saying it would be cheap, but it would be fun. And definitely surprising.

Is there something surprising about your agency or your personal brand?  Have your seen any surprising ideas lately? I’d love to hear from you.